Fashion, a general term for the style and custom prevalent at a given time, in its most common usage refers to costume or clothing style.

The more technical term, costume, has become so linked in the public eye with the term "fashion" that the more general term "costume" has in popular use mostly been relegated to special senses like fancy dress or masquerade wear, while the term "fashion" means clothing generally, and the study of it. This linguistic switch is due to the fashion plates which were produced during the Industrial Revolution, showing the latest designs.[citation needed] For a broad cross-cultural look at clothing and its place in society, refer to the entries for clothing, costume and fabrics. The remainder of this article deals with clothing fashions in the Western world

The continually changing fashions of the West have been generally unparalleled either in antiquity or in the other great civilizations of the world until recent decades. Early Western travellers, whether to Persia, Turkey, Japan or China frequently remark on the absence of changes in fashion there, and observers from these other cultures comment on the unseemly pace of Western fashion, which many felt suggested an instability and lack of order in Western culture. The Japanese Shogun's secretary boasted (not completely accurately) to a Spanish visitor in 1609 that Japanese clothing had not changed in over a thousand years. However in Ming China, for example, there is considerable evidence for rapidly changing fashions in Chinese clothing.

Changes in costume often took place at times of economic or social change (such as in ancient Rome and the medieval Caliphate), but then a long period without large changes followed. This occurred in Moorish Spain from the 8th century, when the famous musician Ziryab introduced sophisticated clothing styles based on seasonal and daily timings from his native Baghdad and his own inspiration to Córdoba, Spain. changes in fashion occurred in the Middle East from the 11th century, following the arrival of the Turks who introduced clothing styles from Central Asia and the Far East.

The beginnings of the habit in Europe of continual and increasingly rapid change in styles can be fairly reliably dated to the middle of the 14th century, to which historians including James Laver and Fernand Braudel date the start of Western fashion in clothing. The most dramatic manifestation was a sudden drastic shortening and tightening of the male over-garment, from calf-length to barely covering the buttocks, sometimes accompanied with stuffing on the chest to look bigger. This created the distinctive Western male outline of a tailored top worn over leggings or trousers. 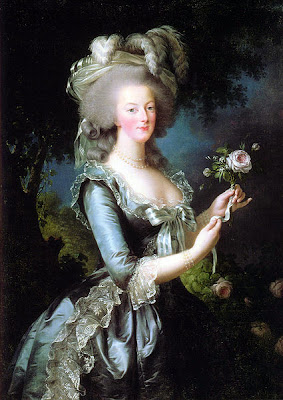 The pace of change accelerated considerably in the following century, and women and men's fashion, especially in the dressing and adorning of the hair, became equally complex and changing. Art historians are therefore able to use fashion in dating images with increasing confidence and precision, often within five years in the case of 15th century images. Initially changes in fashion led to a fragmentation of what had previously been very similar styles of dressing across the upper classes of Europe, and the development of distinctive national styles, which remained very different until a counter-movement in the 17th to 18th centuries imposed similar styles once again, finally those from Ancien Régime in France. Though the rich usually led fashion, the increasing affluence of early modern
Europe led to the
bourgeoisie and even peasants following trends at a distance sometimes uncomfortably close for the elites - a factor Braudel regards as one of the main motors of chang
ing fashion. 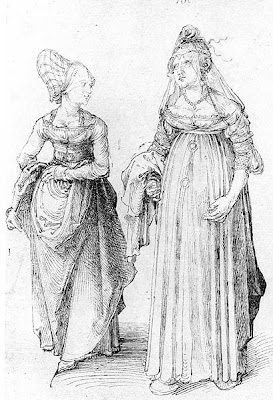 Marie Antoinette was a fashion icon..

Ten 16th century portraits of German or Italian gentlemen may show ten entirely different hats, and at this period national differences were at their most pronounced, as Albrecht Dürer recorded in his actual or composite contrast of Nuremberg and Venetian fashions at the close of the 15th century (illustration, right). The "Spanish style" of the end of the century began the move back to synchronicity among upper-class Europeans, and after a struggle in the mid 17th century, French styles decisively took over leadership, a process completed in the 18th century.

Though colors and patterns of textiles changed from year to year, the cut of a gentleman's coat and the length of his waistcoat, or the pattern to which a lady's dress was cut changed more slowly. Men's fashions largely derived from military models, and changes in a European male silhouette are galvanized in theatres of European war, where gentleman officers had Albrecht Dürer's drawin contrasts a well turneoutbourgeoisefromNuremberg (left) with counterpart from Venice. The Venetian lady's high chopines make her taller (About photo)

opportunities to make notes of foreign styles: an example is the "Steinkirk" cravat or necktie.

The pace of change picked up in the 1780s with the increased publication of French engravings that showed the latest Paris styles; though there had been distribution of dressed dolls from France as patterns since the 16th century, and Abraham Bosse had produced engravings of fashion from the 1620s. By 1800, all Western Europeans were dressing alike (or thought they were): local variation became first a sign of provincial culture, and then a badge of the conservative peasant.

Although tailors and dressmakers were no doubt responsible for many innovations before, and the textile industry certainly led many trends, the history of fashion design is normally taken to date from 1858, when the English-born Charles Frederick Worth opened the first true haute couture house in Paris. Since then the professional designer has become a progressively more dominant figure, despite the origins of many fashions in street fashion. The four major current fashion capitals are acknowleged to be Milan, New York City, Paris, and London. Fashion weeks are held in these cities, where designers exhibit their new clothing collections to audiences, and which are all headquarters to the greatest fashion companies and are renowned for their major influence on global fashion.

Modern Westerners have a wide choice available in the selection of their clothes. What a person chooses to wear can reflect that person's personality or likes. When people who have cultural status start to wear new or different clothes a fashion trend may start. People who like or respect them may start to wear clothes of a similar style.

Fashions may vary considerably within a society according to age, social class, generation, occupation, and geography as well as over time. If, for example, an older person dresses according to the fashion of young people, he or she may look ridiculous in the eyes of both young and older people. The terms fashionista or fashion victim refer to someone who slavishly follows the current fashions. 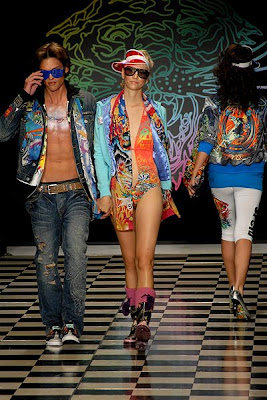