Diesel S.p.A. is an Italian design company. It is best known for clothing aimed at the young adult market, particularly jeans, but the brand can now be found on everything from underwear to fragrances. The company is owned by its founder Renzo Rosso, and is based in Molvena in northern Italy. 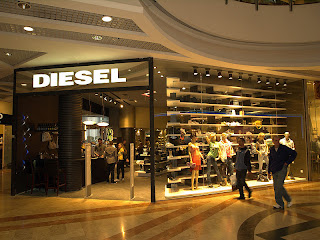 The company was founded by Renzo Rosso and his former boss Adriano Goldschmied of the AG Jeans company, in 1978. Diesel's milestone years include 1985 (Renzo's complete acquisition of the company), 1988 the hiring straight out of fashion college of current head designer and Creative Director Wilbert Das, 1991 (beginning of the international marketing strategy) and 1996 (opening of Diesel's first flagship store on New York City's Lexington Avenue). In February 2007, the company launched a major intimates and beachwear division for men and women that is carried in the retail and department stores. Diesel Black Gold was announced in November 2007. The company has around 2,200 employees in 18 subsidiaries across Europe, Asia and the Americas. Its products are available in 5000 retail outlets, of which 300 are Diesel-branded stores. Annual sales were approximately €1.2 billion in 2005, and €1.3 billion in 2009. Revenue is largely derived from denim sales, but also extremely successful and influential ranges of accessories and children's wear - Diesel Kid.

Production of denim jeans is based mainly in Italy.

The biggest store is located in Milan, Italy. 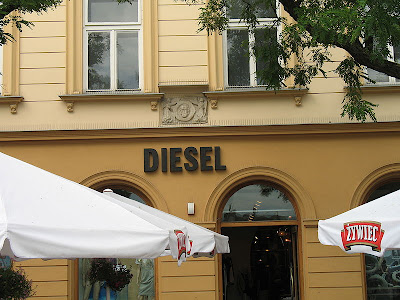 From the very beginning, Diesel's design team turned their backs on the style-dictators and consumer forecasters of the fashion establishment and let their own tastes lead them. It is for this reason that Diesel immediately became a leader in developing styles, fabrics, manufacturing methods and quality control, guaranteeing an outstanding quality product.

The company now views the world as a single, border-less macro-culture. The Diesel staff reflects this: a wide variety of people and personalities from all parts of the globe, creating an unpredictable, dynamic vitality and energy within the company. Diesel people and their working methods are so unconventional, and yet productive, that they have been profiled in countless magazines, newspapers and documentary television programs, and have been studied by consulting organizations, international conglomerates, universities and business schools.

Diesel's "historical moments" include mile-stones like 1978 (creation of the brand name), 1985 (Renzo's complete acquisition of the company), 1991 (beginning of the international marketing strategy) and 1996 (opening of Diesel's first flagship store on New York City's Lexington Avenue).

Ever since the beginning, Renzo Rosso believed in addressing the world with one product and one language, and one of his first steps was building a solid and vast distribution platform stretching across all 5 continents.

Most of Diesel's current production is outsourced, to small and medium-sized companies. Production of denim jeans is based exclusively in Italy. All international logistics operations (wholesale and retail) are centrally managed and carefully controlled.

Today Diesel is a global concern with a consolidated annual turnover of 540 billion Lire (US$ 320 millions), 85% of which is generated outside Italy. The Headquarters are located in Molvena, in the north-eastern part of Italy, where the company manages 12 subsidiaries across Europe, Asia and the Americas. Diesel employs over 1,000 people worldwide.

The company has almost 200 retail outlets worldwide and more than 1,300 employees. Annual sales are $1.220 million. Diesel records 60% company growth by every year.

Diesel was founded in 1978 by Renzo Rosso.

Learn more about Diesel from their web site.