Mike Tyson was there to support his movie Hangover

Mike Tyson and wife
He actually looks great, and I love his silk dress scarf.

More photos and last night's winners when you continue to read....
Winners of 2010 Golden Globe Awards:

ANIMATED FEATURE FILM
“Cloudy With a Chance of Meatballs”
“Coraline”
“Fantastic Mr. Fox”
“The Princess and the Frog”
WINNER: “Up”

Gerard Butler in a Dolce and Gabanna tuxedo

Matthew Morrison in a Dolce and Gabanna tuxedo

Everyone tended to keep it basic and black this year. Usually there are a number of guys who may opt for suits instead of tuxedos, maybe a few in grey/brown/navy suits, some who decide to wear black on black (black dress shirt and suit), and a few who choose to wear their tux with a bright colored tie... not this year. This year everyone wore a black tuxedo with a black tie, back to the basics I suppose.
Diposkan oleh Artist Today di 1:18 PM No comments: 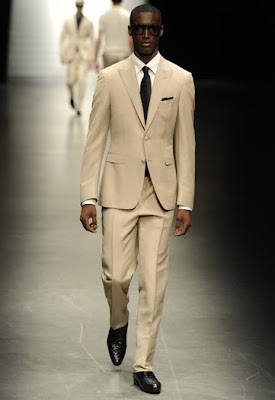 Canali.
"Classic Perfection"
Canali is for grown men, it's just one of those labels that makes you very official-- as far as being a well-dresses businessman goes anyway. And Canali's spring collection falls in line with their usual grown man swag, but with a fresh 50s/60s edge. This collection is full of suits that can be dressed up or down. ***
Spring 2011 Trends: So far the trends are pretty obvious... we're still paying tribute to the 1900s-- mainly 50s, 60s, 80s, and 90s. For all you guys that were never into the skinny stuff or are tired of the skinny stuff-- smile, menswear is making subtle switches to looser pants. But skinny-lovers don't fret, it's just to give you guys more variety. And last, but not least modified versions of espadrilles are seen through a number of designer collections, so if you don't have a pair you may want to scoop a pair of Toms now.
Diposkan oleh Artist Today di 1:07 PM No comments:

D&G.
"Ode to Suburbia"
A direct ode to the casual lifestyle of 50s Americana suburbia-- polos, gingham, vintage safari/beach vacation prints. This is a great collection So here's a quick run down on a few favorites from the Men's Spring 2011 shows...

Trussardi 1911.
Talk about a home-run hitter, Trussardi's collection is the most comprehensive I've viewed thus far. They mix the best trends with forwarding-thinking luxury fashion, while mixing in retro American style the whole way.

The collection has something for every type of guy: the traditionalist, the prep, the rocker, the 'whatever category you put may find yourself in', there's atleast a couple pieces in Trussardi's spring collection that's for you.

The collection transforms from slick retro red, black, and white to updated 90s American prep, gotta love it. The prints? Native-American. check. Stripes. check. Plaid. check. And get this-- Trussardi even gives us a "hint of fatigue", lol. Is Milan Vukmirovic in my head... I think he is. (He's Trussardi's creative director, btw). But more than anything, Trussardi's Spring 2011 collection gives us proper elegant summer layers-- shawl sweaters, a variety of jackets, swanky footwear, and bags (that don't look like purses).
***
Diposkan oleh Artist Today di 12:43 PM No comments: